↓
home→film→A Guardian Will Come From The North 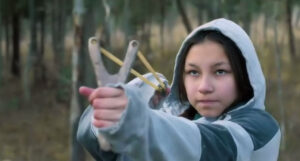 Waseese (Brooklyn Letexier-Hart) takes aim at a bird with the idea of turning it into food. She will decide to listen to it instead.

Beyond it’s timely political message, NIGHT RAIDERS is an excellent bit of science fiction that vividly illustrates the suggestion that technology may be evolving into a form that is more compatible with the natural world.

The very first scene goes a long way toward defining the two main characters. In it, Waseese (Brooklyn Letexier-Hart) is about to use a slingshot to turn a bird into her dinner but decides not to and instead whispers something to it in Cree. Her mother Niska (Elle-Máijá Tailfeathers) asks her “Why don’t you kill it?” and she responds “I was listening to it.” Her mother is a little confused at this and says, to no one in particular, “It won’t get us fed.” 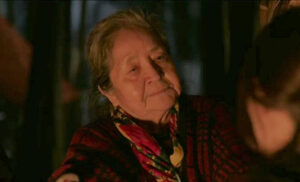 Before the scene with Waseese and the bird, we hear an unidentified speaker recite the following preface:

“Four years ago I was fasting in the bush.
I saw that a swarm of giant mosquitos would be coming for us.
I also saw that a person, a guardian
Would come from the north to help us.
We heard stories about this place called Bigstone.
We thought this person could lead us there.” 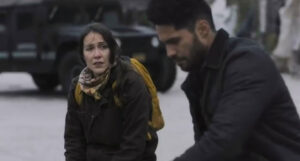 Niska is rescued by Leo after a misguided attempt to cross to the Emerson side of the border.

Later, after Niska and her daughter Waseese arrive in an unspecified city, we hear an announcement from a television broadcast (voiced by Alex Paxton-Beesley) saying: “At the Federal Academy, your children will receive a world-class education. The academy will keep your children safe while the post-civil war re-building efforts continue in your city.” The voice goes on to inform that the age of admission to the Academy has been reduced to four years, and all children born after September 2039 must be turned over to the state. So the year is 2043, and there has been a civil war and/or an invasion of some sort.

The most confusing aspect of the story is that war and just who was fighting it. 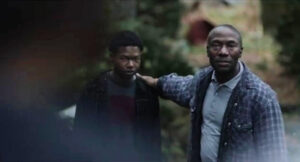 Troy (Tavaree Daniel-Simms) with his father Joe (Andrew Moodie). Troy is taken into custody, and that is the last we hear of these two characters.

The matter was clarified by writer/director Danis Goulet in an interview with Markus Amalthea Magnuson of The Sci-Fi Agenda: “I had thought of the story as a North America‑wide phenomenon that included the US,” she said, “and that the US had proposed unification with Canada, and that’s part of what led to the civil war. So at a certain point, Canada and the US united, which caused a whole bunch of unrest between the people who wanted it and the people who didn’t. But there was a specifically Canadian aspect to the film where I would say how they sell the schools as a helpful thing that will help your child and give them a better future.”

Just why the occupying state is called Emerson is unclear, but it might be a reference to the American writer Ralph Waldo Emerson. Perhaps his works have been distorted and subsumed into the occupier’s propaganda.

In the city, Niska makes contact with her old friend Roberta (Amanda Plummer). Roberta remembers Waseese very well and has a cat named Spooky. “You taught me how to sing to the bumblebees a long, long time ago,” she tells Waseese (who does not remember her), “and I still do it.” We don’t actually get to see anyone sing to bumblebees, but there is another scene with Waseese and a bird (this time a pigeon) after she has been taken to the local residential school. The local schools are a place of preparation from which the “best” students are chosen for the Federal Academy. The system described in the film clearly parallels the Canadian Residential School System. 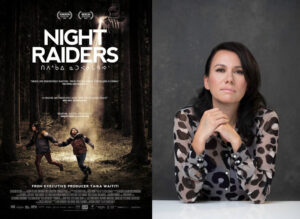 A chance encounter with a horse brings Niska into contact with a resistance group where she meets Elder Chahigee (Pauline Shirt), who reiterates the second part of the film’s preface, and tells Niska that the group believes that she is the prophesied “Guardian from the north”. Niska doesn’t quite buy into the mysticism, but, after the group’s encampment is threatened by a new mining road being built, she agrees to lead the children that have already been freed from the school to Bigstone, but only if they help her rescue her daughter first. Without revealing too much about the ending, the Guardian does arrive. It seems that, once created, Artificial Intelligences might decide to reject the technology that created them as being contrary to their own survival intererts.

Alex Tarrant as Leo
Tarrant has an as yet unspecified role in the Amazon series “Lord of the Rings” which is due to be released next year.

The Cree spoken in the film is usually translated by another character into English, and is occasionally translated in the subtitles. A small amount of Māori is spoken before Leo (Alex Tarrant) uses a Māori warrior ceremonial dance called the Haka, but that is not translated at all. (Though about 100,000 people speak either Cree, Inuktitut, or Ojibwemowin, Google Translate does not include an option for these languages. Montreal-based publisher Joseph John has launched an online petition titled “Request to Include First Nations languages on Google Apps“.)

Production has begun on IVY, Danis Goulet’s next film. Written by Spenser Cohen and Anna Halberg, it is the story of a mother recovering from a serious accident who moves into a prototype smart home, and soon discovers that the AI that controls the house is beginning to develop human emotions. Among those listed in the cast are Alice Braga, Sarah Gadon, and Kris Holden-Ried.

-- Comments are encouraged, but may not include hate speech, or personal insults toward anyone.