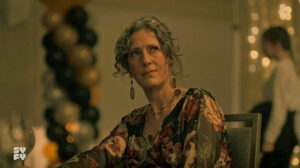 Luke (Tim Rozon) and the gang (late in the episode, someone refers to Susan as “Daphne from Scooby-Doo”) arrives at their offices exhausted after having dealt (ineffectively it turns out) with a Roadie demon, which is described as a class three shapeshifter that bounces from person to person looking for a home. Such demons (we are told) are attracted to haunted houses because they feed on the spiritual turbulence that exists there. They have no corporeal mass of their own, only that of the body they occupy. Augie (Maurice Dean Wint) believes he has dispatched this particular Roadie using a device of his own construction that employs, among other things, the blades from a food processor. (Since the demon has no corporeality, it would seem unlikely that such processor blades would have any effect on it.) The Roadie turns out to not be dead and has followed the gang back to the office. An alarm sounds, and the upper floors of the building are locked down. 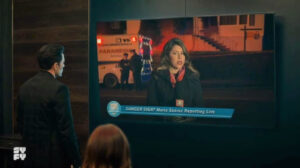 Leila Beaudoin makes her acting debut as Channel 7 news reporter Maria Suarez who is giving the Roman Agency some unwanted press coverage. Since 2015, Beaudoin has been reporting and anchoring with NTV in Newfoundland and Labrador.

The Roadie jumps from person to person and while it is inside each it makes that person say exactly what they feel, and that makes for some awkward moments. Augie, who tries to kill it again after it possesses Luke, and again believes he has succeeded, undertakes an honest conversation with Zooey (Savannah Basley) in which he describes her as “needy”, and we learn the names of the last three people Zooey has dated (A.J., Chris, and Jeffrey) and that at least one of those is female. While possessed, Augie has Mr. Fantastic-like elasticity, and Zooey can perch on walls like a fly. All this happens on the eve of the ceremony for the Platinum Ring of Esteem award which Susan (Sarah Levy) has again won, and which Luke describes as “Prom with business cards”.

The Roadie searches the office computer system and seems fascinated by the Donovan house. Susan makes a direct reference to THE SHINING (1980), Stanley Kubrick’s film about a haunted hotel, and there is a beautifully macabre scene in which Luke dreams of dancing with his mother (Jennifer Dale) in black evening dress on a balcony (possibly a balcony of the Donovan house).

We do not meet Jack the Security Guard, but we do find out that he has a crush on Susan which enables her to get him to cart the gang’s Chinese food to them from the ninth floor (above which the elevators have been disabled to keep the Roadie from escaping). Megan Donovan (Tennille Read) delivers a new food processor to Augie so that he can improve the effectiveness of his demon-killing device. Luke assumed that Security Guard Jack would bring the device to them, but Megan delivers it herself, and gets stuck in the office with the rest of them. 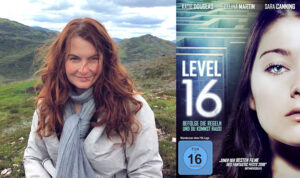 LEVEL 16 (2018), directed by Danishka Esterhazy (who also directed this episode of SURREALESTATE), is now available on Netflix

Susan survives the awards ceremony in fine fashion once her co-workers arrive to provide support. The best line of the episode belongs to Susan’s mother (Alison Woolridge), who tells Susan’s former boss (Jefferson Brown): “Die in a fire, Bob.” Almost everyone seems happy after the awards, but something seems amiss with Megan. She tells Luke she wants to go home, then climbs wordlessly into an Uber and does that, leaving him puzzled on the sidewalk. When she addresses her driver, her eyes are dark and very strange. Clearly, though it is not specified, this is part one of a two-part episode. (Both this episode and the next are directed by Danishka Esterhazy, but only this part was written by showrunner George R Olson. Next week’s episode was written by Ramona Barckert.)

-- Comments are encouraged, but may not include hate speech, or personal insults toward anyone.